What A Sexy Salsa-Dancing Peruvian Man Taught Me 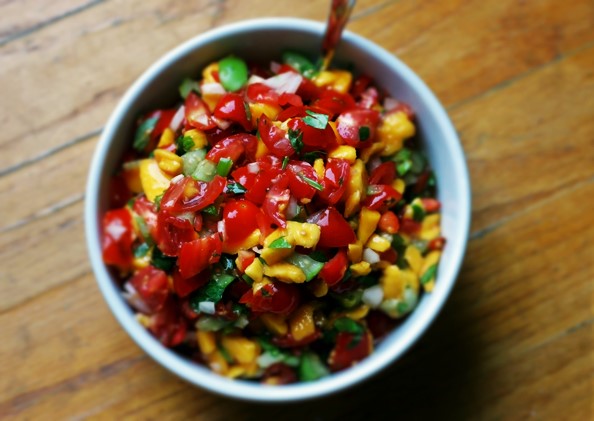 When 2015 reared it’s glittering head, I was in the middle of the main square in Cusco, Peru, covered in six sol ($2.00) champagne and being literally hit in the body with real-life fireworks. It was like a really beautiful, really lively mine-field. The next day, we would be climbing some of the Andes to Machu Picchu, but at that moment we were dodging pick-pockets and residual explosives. Nothing could have been more perfect.

We returned to the same square a few days later to celebrate our ascent to good old Mach Pich, after we’d had a few drinks and dinner with our guides, Diego, Orlando and Henry. Post-dinner, Diego led us to a big blue door in the corner of the square, and beyond it, a tight staircase, to a dark little bar blasting Salsa music. Some guy with a headband and surprisingly mobile hips was teaching a few locals some basic steps, so naturally we joined in.

Eventually, the club started to fill up, and the real dancers began to flood the dance floor – and let me tell you, I have never wanted to be a sexy South American woman more in my life. There was this one couple that was just shredding; it was like their souls were connected, or something passionate and Peruvian like that. This is the kind of stuff you only dream about seeing in American bars; there was no beat-less and boring grinding, there was no awkward dancing. For the majority of the night, the dance floor was just coated in couples emanating this firey energy and synergy, and they oozed sex more than a Victoria’s Secret model ever could. We rhythmless Americans watched in awe.

And then, ohmygod, the sexy local guy that had just been shredding with that other sexy girl asked me to dance. How could I say no?

When he led me onto the little dance floor, he was patient – he told me the move we’d be doing and then we’d do it, counting to the music. I really wanted to move the right way, so I’d be concentrating, counting each step, holding his hands, thinking about how my hips should be, wondering if my hair looked okay, cursing the fact that he was so good, thinking, ‘Hey I think I’m getting the hang of this,’ thinking ‘Oh, wait, shit, I almost just stepped on his foot’ –

I looked up from my feet.

“You think too much.”

And for some reason, a switch turned off in my brain, and suddenly we were actually dancing. I’m talking spins, I’m talking body rolls, I’m talking lifts. Fire. I was there, holding his hands in the smokey bar, moving my hips and feet in unison with his. Not thinking, just doing.

When the song ended, I gave him a breathless ‘thank you’ and moved myself and my pit stains back to the bar, where my drink was waiting. I watched the couples dance some more, and eventually the bar disintegrated into a big party. The rest of the night was spent dancing and singing in Spanish. But what he said stuck with me, and as always, I’m going to reflect on it here.

We grow up with the lesson, “Think before you speak.” We are told to think about what we’re about to do because our “actions speak louder than words.” I can’t really think of a saying I was told in childhood that encouraged me to let my guard down. We are a country of a collective guilty conscious, taught more in terms of consequences rather than personal rewards. We’re also part of a society that tells us to be conscious of how we look and act at all times. I’ve always been hyper-aware of myself, and I credit that to a bunch of things, including my inability to realize the advantage of letting go.

I am not a great Salsa dancer – I literally am so out of shape that I was out of breath by the time Sexy and I finished dancing. But by letting go of my ideas about how I was supposed to look, or how I could impress him with my skillz, I was able to just have a good time. I was able to get a little sweaty and work with him. And we ended up doing pretty well.

I guess what I’m trying to say is that we’re always in our heads. Sometimes I think we just need a brain vacation. I know I’m not the only one to torture myself with my own thoughts. Maybe letting go is worth the risk of losing a little logic or being embarrassed, even for a moment. And this could apply to anything – asking That Person out, finally, or apologizing to a friend, or outweighing the negatives and taking that leap of faith you know you’ve been needing to, whatever that involves. Our biggest obstacles usually involve our own inhibitions. That realization might actually be the most powerful thing you could ever come to. Your inhibitions are the bad guy. Conquer them, and you conquer the bad parts of yourself.

Don’t judge me, but there’s this saying from We Bought a Zoo that I just love:

“All you need is 20 seconds of insane courage. Just literally 20 seconds of embarrassing bravery. And I promise you, something great will come of it.”

It’s true – I bet if we just take a few seconds to let go and act instead of think, dance instead of calculate, then I guarantee we can do something amazing.

And if you don’t trust me on that, I encourage you to find a sexy Peruvian to Salsa with you. Then I’m sure you’ll believe me.