Hiking Up The Inca Trail 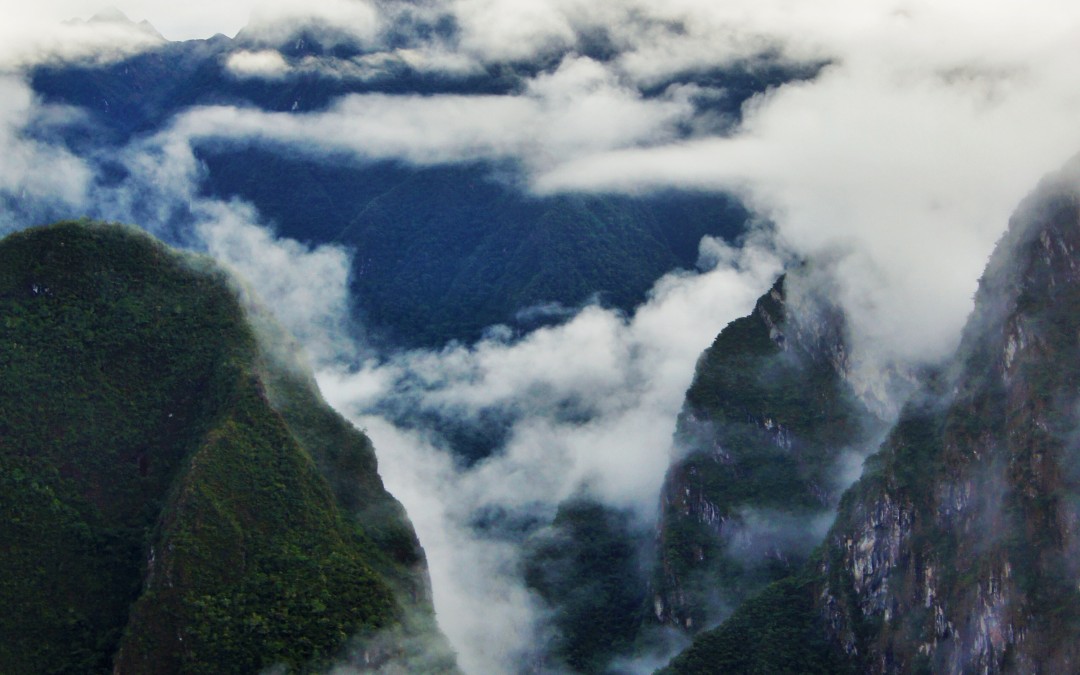 We’d gotten lucky. For some reason, Illapa, the god of thunder and weather, had taken the day off. Peru’s rainy season was unrelenting and we’d all prepared for an uncomfortably moist hike up our stretch of the Inca trail. Instead, we were greeted by patches of blue sky from the moment we hopped off the train in the middle of the jungle.

It was New Year’s Day; we’d been travelling north from Cuzco into denser mountains since 3 a.m., by bus, and then by train. A few in our group were still hungover from the chaotic festivities that had taken place only a few hours before in Cuzco’s main square. Fireworks were still exploding behind my eyes as we stepped off in a decidedly unmarked location whose only evidence of identification took the form of a faded wooden sign that read Inca Trail. In Spanish, of course.

Everything was green, except when it was blue, like the sky, or brown, like the Urubamba River, whose majesty we only got to see as we began to ascend, slathered in sunscreen. Our raincoats eventually made themselves into our backpacks or around our waists, and we traveled like a big, slow, American snake, slugging in the wake of our dexterous guides, Henry, Orlando, and Diego.

The hike was a perpetual ascension, akin to a kind of sweaty, slippery, breezy, verde Stairway to Heaven. We stopped along the way at various ancient ruins that sat casually as they watched us travel along. With each step, I became more and more in awe of the Incas, my mind traveling back over centuries of New Year’s Days to see them carve and carry stones at 8000 ft. above sea level up these vast mountains. (At one point, after a sweaty second of regret for putting so much stuff in my backpack, we passed a ruin with stones larger than my torso carved and effortlessly fit together like puzzle pieces. I adjusted my backpack straps and kept walking.)

I felt bad for our guides, who I think must have seen us as a very long ball and chain as they climbed nimbly up stone steps and along the thin, snaking trail embroidered into the side of the mountains. They told us that they and the other guides they worked with sometimes had competitions to see who could climb the entire Inca trail the fastest. The full trail typically took four days to complete (we were only doing the one-day option).

The current record held among the guides for the fastest full-trail hike?

Well, four hours and twenty minutes. But we can round down.

Our guides were local men, some of whom still held traditional Inca beliefs. Between his stories of trail running and the time he had to carry a woman up the entire trail on his back because she had hurt her ankle, our guide Henry explained what the mountains meant to the Incas, and what they still mean to the people today.

There is a kind of spirit god called apu, which is a god of mountains. Many mountains had their own apu, or spirits who connected both the earthly and heavenly worlds. In ancient times, these apu were offered goods to give thanks and, in hard times, sacrifices in exchange for guardianship. Today, they are simply respected with a sense of quiet awe. Listening to Henry, I felt very small. It was true – something about the landscape itself was alive. I could see why the mountains were revered in such a way.

The hike continued for the rest of the morning, and as the sun made its decent into the early afternoon, I began to feel the buzz of a close destination. It was quiet at first, a quiet hum as we kept climbing over the second mountain face of the day, nearing our third. We spoke with our thumbs hooked in the straps of our backpacks, all amused by the llamas we’d seen at the last ruin and excited by our proximity to the Sun Gate, supposedly the checkpoint where we’d get our first view of Machu Picchu.

We passed through a base camp. We brushed our hands along low hanging leaves. We grinned at rare orchids lining the trail, purple and orange and red. The buzz got a little louder.

Soon enough, we reached the “Gringo Killers,” a coyly named staircase that had to be at an 85 degree angle. (Gringo is a slang Spanish word for “white man.”) All I could think about while climbing them was to just keep going. Perpetual ascension.

Diego, standing at the top, offered high-fives, and I grinned, slapping his hand breathlessly when I reached him. Legs burning, I fumbled around with my water bottle, trying to pull it out, giving a quick glance to my surroundings.

My eyes widened. I stopped searching for my water. We were at the Sun Gate.

I could see it. Machu Picchu was there, nestled in between peaks a mile or so from where we stood.

Today, we would only admire it from a distance. But less than 24 hours, after spending the night in the little transit town Aguas Clientes at the bottom of the mountains, we would officially be entering the ancient, abandoned city of Machu Picchu.

In the far distance, we could see little white llamas dotting the terraces of the ruins. I scanned the impossibly huge, green mountains and I remembered what Henry said about the apu.

Looking out, I could almost feel them staring back at me. Ancient and beautiful, they cupped Machu Picchu in their hands. Waiting.