The Cardinal and The Alien 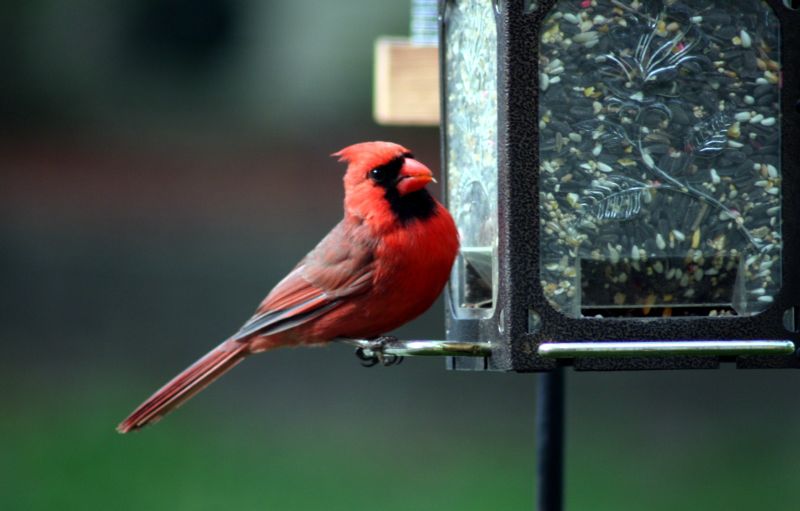 Every morning until every evening of every day for about 4 months now, there has been a little bird at my dining room window.

Rather, there has been a little bird smashing its face into my dining room window.

Every morning of my last few months of high school I awoke and left the house to the rhythmic TAP TAP TAP of this insane bird which, upon further inspection, turned out to be a female cardinal. Sometimes, I would try to be really still and watch it from the other side of the window. It would sit in the bush right outside, snow/sleet/wind/rain or shine, and look at the pane of glass (I still have no idea what it saw – maybe it was its reflection or something, but female cardinals are not particularly known to be aggressive). Then it would simply propel itself into the glass, over, and over, and over, for hours on end.

I read somewhere that cardinals (sweetly) mate for life, and live together forever like an old, brightly colored married couple. Sure enough, during the start of the female cardinal’s face-crunching episodes, her male cardinal would sit on the other side of the bush, just watching, unable to make sense of what was happening to his lady. Later, I would see him in a tree beyond the bush, slouching as he listened to the TAP TAP TAP of his wife smashing her beak into our window. But one day, I couldn’t find him anywhere. He was gone, having left his hopeless life partner at the sill, recognizing that she had done too much damage to herself for her to get better.

She didn’t even notice he was gone.

It was kind of sad, but she kept at it. By then, it reached the point of annoyance; whenever we heard her knocking, someone would run screaming into the dining room, with their hair crazy and their arms flapping, telling her to “OHMYGODSTOP!” It would be effective for about 15 minutes.

Then May rolled around, and with it, the annual town fair creaked in. One night, my fifth grade brother and my dad went down to get a confectionary fix. They came back with a giant, blow-up, purple alien. About my height, the alien had a freakishly large head and huge black eyes, being the kind of toy that would make you pee yourself if you stumbled upon it at night. It was (and is) ugly and scary, taking first place as the worst fair toy my brother has ever gotten in his 11 years.

So one day, between the cacophonous din of the stupid cardinal and the moans of my family at its TAPPING, someone had a brilliant idea that went something like this: “Let’s put the alien in front of the window!”

And so we did.

It stopped smashing against the window.

So, what am I getting at here?

There are two ways for this story to relate to you. You either 1. Know The Cardinal or 2. Are The Cardinal. Let me explain.

Anyone in the world has found themselves, or seen someone else, hitting a metaphorical window over and over. We all have that friend that we want to shake and scream at; maybe it’s the girl that keeps going back to the wrong boy, or the funny druggie friend that literally smoked away his future. It could be the kid with no motivation, or the one who is too afraid to try anything new. The cardinal could represent people stuck in the past, the non-progressives, the people who still hate gays or are sexist or are prejudiced against other races. To those people: WAKE. UP.

Even everyday citizens will find themselves stuck in the middle of destructive decisions, or destructive relationships, or destructive lifestyles, creating a rut that they can’t climb out of. And these “destructives” don’t have to be extremes; they could be regular, boring, repetitive normalities of every day life. But that’s not the concern; the problem is that most of the time, us cardinals never wake up. We can push away our best friends and most loving companions (i.e., our male cardinals) by sticking with our “destructives.” We can drive ourselves crazy with repetition and settling. Even when our friends look at us and scream “OHMYGODSTOP!”, we still don’t register.

I don’t mean for this post to take an unexpectedly dark turn, but this is a warning.

Life doesn’t usually give out purple aliens. And when it does, they aren’t pretty. We always hear stories about unhappy people whose outlooks on life changed only after they had gotten cancer, or after their dad died, or after their husband cheated, or after their kids turned to drugs. Sometimes, we need that extreme to shake us, or wake us up; but most of the time, we don’t. We can take as much from the small signs in life as we can from the large ones.

You gotta stop hitting the window. Just open it.